Toronto Artist Bruce Thomas Deconstructs the Canadian Identity in his new work, The Canadian PULSE Project June 29, 2009 – TORONTO – What defines us as Canadian? Canadian Artist Bruce Thomas sets out on a cross-Canada tour in search of answers for his Canadian PULSE Landscape Project. A work in progress, Thomas challenges the Canadian historical landscape perspective and uncovers a new approach to traditional landscape painting through the eyes of Canada’s growing multi-cultural society. Traveling across Canada, Thomas hopes to interview hundreds of Canadians and document their perspective on what defines the quintessential Canadian Landscape. Using this research to form the foundation of this multi-media project, Thomas will begin to form the new Canadian Landscape identity. “The Canadian landscape identity most of us relate to is Tom Thomson’s famous, West Wind painting. World-wide The Group of Seven have always embodied the most identifiable Canadian landscape. Now that we’re coming up on 100 years since Thomson created his first landmark paintings, I wondered where we now stand in terms of Canada’s visual identity “says Thomas. The Canadian PULSE Project will incorporate sound, video and paintings to express and explore Thomas’s experiences traveling across Canada. Talking with a diverse representation of the population about what it means to be creative in Canada today will be starting point for the project. These collected interviews, field recordings and drawings will then be compiled and transformed into a series of large-scale mixed media compositions. “I believe this form of integrated, journalistic, intrepretive media has the potential to produce new hybrid art forms, which will encourage innovative practices and ultimately break new ground in terms of understanding our rapidly evolving national identity, “ says Thomas. As a multi-disciplined artist and graduate of Concordia University, Thomas has also worked for more than 10 years in the music, film and art industry . Today, he draws upon this experience as inspiration for his most recent collection of paintings. The Canadian PULSE Project , will ultimately condense the meaning of an entire film into one frame on a canvas. His methodology is a “series-based”, constructivist approach that uses different medium to produce tangible examples of an intangible inspiration. 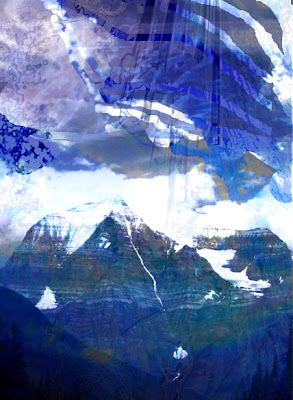 It’s about the Yellowhead highway. It starts in Saskatchewan and goes northwest. It was heralded during the construction of the Grand Trunk Railway in the early 1900's.The route was named for a French explorer. He had blond hair so they called it the ‘Tête Jaune Cache’. You come around this bend and into the valley and above you rises Mount Robson...Wow,it has a mystique about it. The farmer I spoke to called it Je jeune and wrote it down as jejeune. There are some interesting things to think about when you think about mountains What are the mountains made of and how did they come about?
Elevation. Perspective is a weird thing. 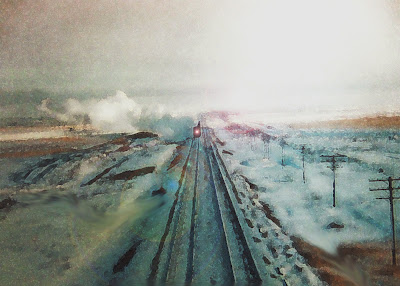